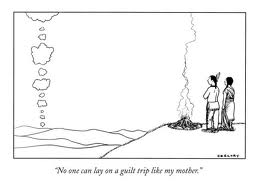 “Does the feeling of guilt serve a purpose? If so, what is it?”

The question about “guilt” was posed in a recent Blog Challenge and after writing A letter to a Ghost it makes sense for me to opine on it a bit. After all my “letter” was rife with my own guilt over the relationship I had with my Mother at the end of her life.

So, does feeling guilty serve a purpose? I think so. The bigger challenge is what to do with the guilt, but let’s first explore what the purpose of experiencing it in the first place is.

In the case of my Mom’s death, I do feel guilty on many levels. I think I lacked a certain compassion that was more appropriate and necessary in those last weeks then my hard edge of disappointment afforded me. I tried to set my feelings aside many times, and always they were shoved back in my face because the very things I was struggling to forgive were ongoing up until a short time before she passed. It was really hard to let go of what was constantly being put in my lap so to speak. That being said, knowing that does not make me “right” and of course guilt was the inevitable result.

Many times throughout my life I felt my Mom intentionally sent me (and others) on guilt trips. The old saying that “no one can send you on a guilt trip without your permission” is not entirely true. The problem is, it isn’t another person that gives you the guilt; they can merely point out reasons why we should feel it and that is what we correlate with being given a “guilt trip”. The unfortunate reality is it is our own selves that give us the guilt because guilt comes from inside each and every individual. Guilt is a feeling, just like love and hate and we alone have the ability to dissect its origins and deal with it.

Feeling guilty comes from our conscience, the thing besides our beating hearts, that make us alive and human. Without guilt we are remorseless and just not very good people. The hardest part of guilt is knowing there is little you can do to redeem the un-guilty feelings inside no matter how hard one works at it because the deed has already been done. All we can really do is try to be better and acknowledge whatever it is we have done wrong and learn from it so as not to repeat the process.