Yesterday I published a piece about the Sunday, April 13, suicide of radio show host, whistle-blower, activist, author and American hero, Michael C. Ruppert. Today I would like to update the readers with some new information I have just received from Michael’s attorney Wesley Miller.

According to Miller, the reason Michael’s death was confirmed by “Napa County Sheriffs” is because Michael was staying in a trailer on his friend, Jack Martin’s, property in Calistoga, California. It was Jack who found Mike’s body resting in an outdoor meditation spot on the property.

Michael Ruppert left two handwritten notes, one of which was a very personal note to his girlfriend/life partner and is a personal letter that will not be shared, at least not any time in the near future. Miller stresses the letter,

The second note was written to Jack Martin, the friend with which Michael was staying at the time of his death and here for you to see… 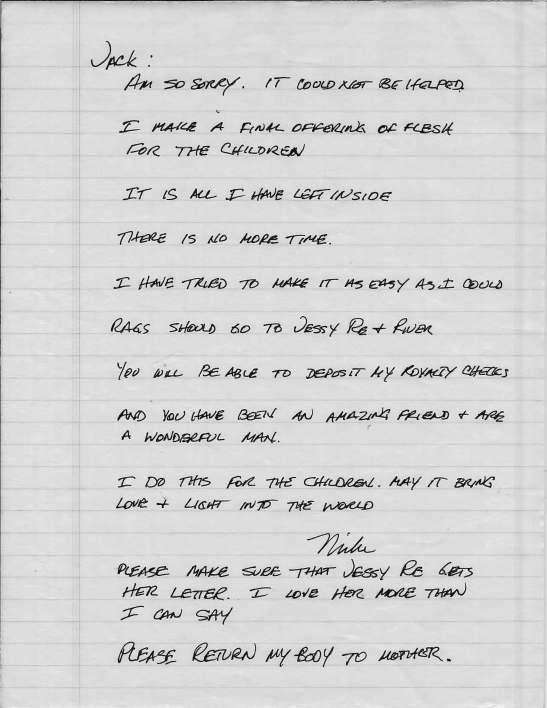 As mentioned, both of these are handwritten notes — although there has been no official handwriting analysis performed, Miller and other friends assure me the writing is undeniably that of Michael.

In addition, Miller told me Michael recently made a will on March 4 of this year. Miller says,

“Portions of that may get published, but it will require some redacting of personal contacts and bank account info.”

Miller stresses the importance of everyone knowing and understand,

“There is absolutely no ambiguity about it – Mike shot himself.”

You can read today’s statements from Wesley Miller in his update at this link where you will understand more about Michael’s struggle with living.

As I receive more information, I will share here on Cheri Speak. I encourage you to share this information because there seems to be a media black-out on this story and the minute information that has made press has lacked any details as those I have been providing. 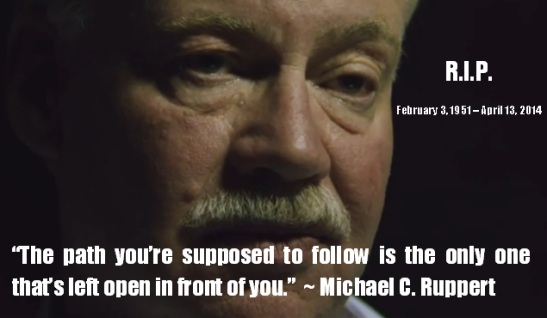 For more info/background on the death of Michael C. Ruppert…

From the Wilderness Forward, What Really Happened to Michael C. Ruppert

“He carried, as it were, the burden of the world on his shoulders. He was almost a Christ-like figure in that sense.” ~ Barry Zwicker – Author, Activist and Media …Continue reading →

Sunday, April 13, after finishing what would be his last, The Lifeboat Hour, radio show, whistle-blower, activist, author, American hero, Michael C. Ruppert, allegedly shot himself, taking his own life. Getting the … READ MORE

On Wednesday I reported that Michael C. Ruppert left two “suicide” notes behind – one that was addressed to “Jack” which I published here, and another addressed to Mike’s partner “Jessy Re”. This information … READ MORE

Let’s Talk Tonight! For those following along wanting more information or simply heartfelt commiseration, I will be joining Carolyn Baker on  Wise Woman Media with Anita Stewart… READ MORE

As I mentioned, there were a total of four “notes” and a poem strategically left behind by Michael C. Rupport. One of those notes, involves Mike’s best pal, his dog “Rags”. At … READ MORE

The piece that most of you are waiting for is already being written. This article will include the details and a time-line of Mike’s last day along with more pieces … READ MORE
*
Get More Info on MindSoothe for for Depression, Insomnia, OCD and Anxiety
Get More Information on Triple Complex Mood Tonic Tissue Salts
Get more info on MoodCalm – Homeopathic remedy temporarily calms emotional outbursts and reduces mood swings