Those Voices in Your Head

We all talk to ourselves and we all talk back, in our head. We reason with ourselves, we pep talk ourselves and sadly we also demean ourselves from time to time. The point is, you don’t have to be schizophrenic to hear voices in your head. We all hear them, including a few that aren’t our own.

Timeless this and that’s once spoken by someone you knew; be it mom, dad, teacher, lover, friend. Whoever, it stuck and these words pop-up in answer to questions we juggle and struggle with all of the time. These voices carry the “words of wisdom” we have gathered across the journey of our own evolution as a human being.

My paternal grandmother used to always say, “Awww, shut uppa you face” mimicking the early 80’s Joe Dolce song which she had somewhere heard and adopted. We weren’t Italian by the way, but she loved this song. If we would have had cell phones with video capability at the time, video of her in the kitchen comically singing this song would have gone viral and she would’a been in the queue for a Johnny Carson appearance.

Anyhow, my gram’s voice and unfortunately also dear old Joe’s voice are two that I often hear in my head, especially if I am starting to get irritated with ya.

I hear my mom’s voice, a lot. Particularly at silly times. Up until her incapacity and then death, my mom would always say, “bread and butter” when we were walking somewhere and anything came between us in our path. Her expectation was for me to immediately say, “toast and jam”. I have no idea where this originated, it’s just something my mom said. And, even though this Newbeats song, Bread and Butter, has nothing to do with what I am talking about, my mom would have liked it so it’s here.

Any time I hear someone ask, “Where are we going?”, I immediately hear my dad’s voice say, “O.D.” Below you can get a glimpse of a typical outing. Now imagine SIX kids in the car asking the same question! I have to admit, I carried this tradition on with my own kids, just not to the extent my dad did to us. That was pure torture. We never knew where we were going! 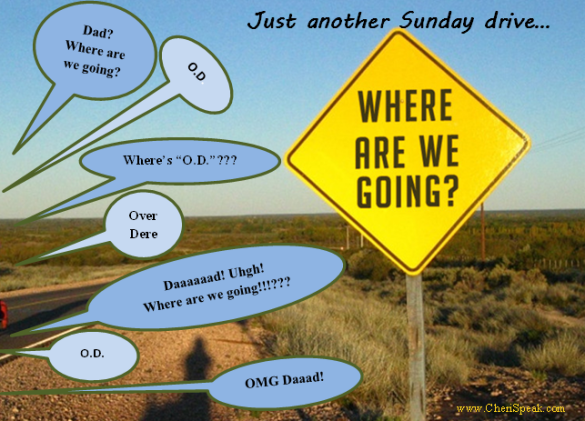 So as you can see, it’s normal to “hear voices” in your head! Come on, admit it. You hear them too.

The proverbial devil on one shoulder and angel on the other is a good place to start counting, so, there’s two, but how many more do you have and what are they telling ya?